It’s suggested that between 1% and 4% of the population has a histamine intolerance. This condition often looks like a food allergy, but most food allergy tests can’t detect it. People with histamine intolerance deal with a barrage of unexplained symptoms, often effecting digestion, that don’t make much sense to them and their health care providers, but continue to make life pretty difficult.

Diagnosing histamine intolerance has become a bit like Hansel and Gretel finding their way in the woods. Before a clinician can decisively say you’re dealing with an intolerance, they have to follow the trail of breadcrumbs that lead them to the source of your symptoms. This is exactly what we do in root-cause-focused Functional Medicine.

Of course, when you’re feeling tired, breaking out in hives, having unexplained flatulence, gas, bloating and diarrhea – even headaches with greater frequency – you know there’s something wrong. If only knowing what was wrong was as easy as knowing something is wrong, we’d all be a lot healthier!

That said, without the right diagnosis, you won’t know for certain if histamine is the culprit or if it’s something else entirely.

Histamine has 23 physiological functions in the body and is one of the most studied biomolecules. Although it has an essential role in our wellbeing it’s also starting to make us feel terrible. Why is that? To truly understand why histamine intolerance can be misunderstood and overlooked — while having such widespread (and crappy) symptoms — you need to understand what histamine does.

Histamine is essential to three things:

It is a key component in stomach acid that aids in proper digestion. Too much histmaine

Histamine acts as neurotransmitter in the brain and spinal cord.

It is the first responder in allergic reactions. Histamine sends inflammation to dilate blood vessels so white blood cells can reach and neutralize invaders.

Everyone has histamine in their gut and nervous system (it’s a naturally occurring entity). It’s also common in food, so you’re likely ingesting histamine regularly.

Thus, what most doctors refer to as an intolerance could be more accurately described as an overload.

Here, your body is reacting to a build up of the biomolecule in your bloodstream and gut. It’s also not something that happens quickly. The onset of symptoms can be gradual and usually correlates with the amount of  histamine in your body.

When the histamine content increases in your body, so do the symptoms – symptoms that commonly mimic those of food allergies.

If you had one small rock in your shoe, it would be annoying but maybe not a big deal. Add a fistful of tiny pebbles, one at a time, and eventually it would be super annoying and you’d have to stop and deal with the symptoms of rocks in your shoe – pain and inflammation in your poor foot. That’s what a histamine intolerance is like: kinda sneaky, creeping up on you until the symptoms are too much to handle.

This is where you’ve got to start looking for breadcrumbs as they’ll help you discover the underlying cause or causes of your condition. To do this, we need to take a closer look at your health and lifestyle. In most cases, histamine intolerance can be attributed to the following, as these things can trigger a build up of histamine in your body:

Over the counter and prescribed medication often have DAO blockers.

The science isn’t definitive on whether gut health directly (or indirectly) affects histamine levels. However, the idea is starting to gain traction in the western medical world, although it could be awhile before it’s fully explored.

I do think it’s worth mentioning as the two are so closely related. As I’ve learnt over decades in my own practice, many patients who experience histamine overload will either have a diagnosed or undiagnosed gastrointestinal issue.

This includes IBS, SIBO, Crohn’s disease and Leaky Gut Syndrome, amongst other issues.

I see a lot of histamine intolerance with SIBO due to the changes in the composition of the gut microbiome. In other words, the good bacteria that help keep histamine in check are no longer able to do their work. Since the metabolism of histamine is directly affected by enzymes (DAO) in your gut, any imbalance (whether seemingly unrelated) could cause a ripple effect.

If you already have a lot of histamine in your system and add in high histamine foods that your gut can’t process out, you’re likely to have histamine symptoms. These aren’t the usual unhealthy foods you’ve been told to avoid. These can be (and likely are) food you’ve been told to eat as part of a healthy diet.

Honestly, histamine is common in most food. That’s why symptoms can persist for quite some time without any obvious “trigger.” However, diet has another role in developing an intolerance to histamine.

Certain food also has the ability to block the production of DAO. When you’re combining a diet high in DAO blockers and elevated histamine due to a gut imbalance or using one of the medications above, an intolerance is a logical outcome.

The trail of breadcrumbs continues! The next thing to do is to take a look at your symptoms and see if there are any of these that could be attributed to a histamine intolerance.

These are the most common symptoms associated with the condition:

The Difference Between Histamine Intolerance and Allergies

Most individuals with a histamine intolerance may think it’s nothing more than a mild food allergy. Since so many symptoms overlap, the idea that you’re dealing with “just a food allergy” is usually substantiated by your body’s reaction to food you’re eating that have a high histamine content.

Keep in mind, however, that histamine is the key ingredient in both allergic reactions and histamine intolerance symptoms.

However, those with an intolerance aren’t allergic to the food that triggers their symptoms. Instead, what they have is either a lack of DAO (the enzyme that metabolizes excess histamine) in their gut, or have far too much histamine in their body — or both.

Some commonly suggested tests include:

This simple, inexpensive test has been suggested to determine whether someone is indeed histamine intolerant. Using a needle, an allergist will either prick or scratch the surface of the skin and then apply a histamine solution to the skin’s surface. They then wait until a wheal (raised bump under the skin) appears, usually followed by determining how quickly it appeared and how long it remained elevated in order to diagnose an intolerance.

Instead of determining whether you have histamine intolerance, a serum tryptase test can help you rule out other possible causes of your symptoms.

In this test, your provider will be able to rule out an increased burden of mast cells as the cause of your symptoms. Mast cells are responsible for releasing histamine. The symptoms of mast cell elevation can look like elevated systemic histamine, and this test can help determine if you’re dealing with one or the other.

Any test can have false positives or negatives, so it’s important for your healthcare provider to analyze your case holistically. To be real, none of these tests are a slam dunk. A smart and experienced clinician is adept at pattern recognition, a skill that I find most useful when it comes to histamine intolerance.

The best test, in my experience, is an elimination diet. This can help give us a good idea of the intolerance and its extent. Changes to your diet continue to be the most accurate method of determining whether you have a histamine intolerance. It’s the simplest (and cheapest) test of them all.

To conduct this test, you’d start by eliminating histamine rich food and beverages from your diet. Document any changes over time. In many cases, those without a histamine intolerance won’t experience any significant change in their symptoms.

Where do we go from here?

As histamine intolerance gains traction in the medical community, hopefully so too will conclusive (affordable) testing. While we wait for that to happen, making simple changes to our diet to cutback on histamine rich food and DAO blockers can be a very effective recourse.

**As always, before discontinuing the use of any of the aforementioned medication you need to consult with your PCP. There are more holistic approaches for many common medical concerns that could reduce or eliminate the symptoms of histamine intolerance without nasty side effects.

I hope you found this information helpful! I am currently focused on helping women to optimize their wellness through life coaching, and no longer provide Functional Medicine consultations with lab work, supplements, etc. Instead, I help women to regulate their nervous systems and manage their thinking and mindset, which is vital root cause medicine. You can learn more about this approach by listening to these episodes: polyvagal theory, leaky gut, and the nervous system.
To learn more about how we can work together, please see victoriaalbina.com/anchored
Please do not email to ask if I can see you as a patient, and instead use the directory at IFM.org to find a Functional Medicine provider who is doing laboratory-based clinic work.
Thank you!
Posted in Digestive Health, General Health 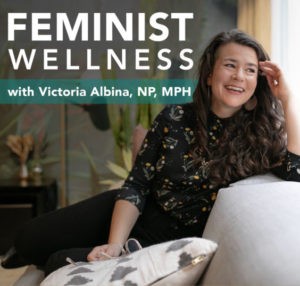